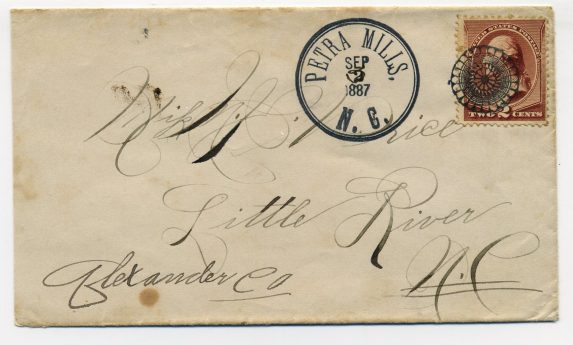 Petra Mills, NC, Sept. 3, 1887, a P.P. Hammond Co. of Aurora, Illinois, double circle CDS Pinwheel cancel tying a Scott #210 issued October 1, 1883 to envelope. The envelope is posted to Little River, NC in Alexander County. Petra Mills was located in Caldwell County. It first opened in 1873. The name was changed to Petra in 1894 and the Post Office was closed in 1906. Postmaster John R. Heath was appointed postmaster on May 26, 1886 and served until August 2, 1890. He would have been the postmaster who ordered the handstamp device and posted this cover. Only ten cities are recorded using this pinwheel type cancel in North Carolina.